TIJUANA – Although his new Tijuana restaurant, Verde y Crema (Green & Cream) is still less than a year old, Hermosillo-born Chef Jair Téllez is no stranger to farm-to-table and use of the freshest, local ingredients in creating a memorable dining experience. His Valle de Guadalupe restaurant Laja (one of the Diners Club’s Latin America’s 50 Best Restaurants this year) is primarily supplied by its own orchard, farm and vineyard. The Diners Club noted, “Laja’s cuisine pays homage to the natural richness of the Baja California peninsula on which it sits. While continually creative, the underlying theme of Téllez’s dishes is strictly seasonal, with classic techniques respecting regional culinary traditions.”

These themes are applied at Verde y Crema with thoughtfulness and attention to detail – bearing delicious results in a welcoming, rustic and relaxed environment. The first thing El Gringo noticed when we rolled up were the number of colorful murals that ringed the private parking lot buildings. Local artists were commissioned by the restaurant to create the murals and the overall impression is one of an urban outdoor gallery.

Tijuana Artist “El Norteño’s” Mural is a highlight in the restaurant’s parking lot.

Walking past an eclecticly-painted gas pump and reclaimed wood panel walls in the front, we found ourselves in an open, arbor-style dining area, whose dark wood floors, tables and bar are also made of primarily reclaimed materials – some of the wood literally pulled from the trash. The front of the bar, set off from the main dining area, is built of green shutters in various states of paint decay, salvaged from a sunken Turkish ship. 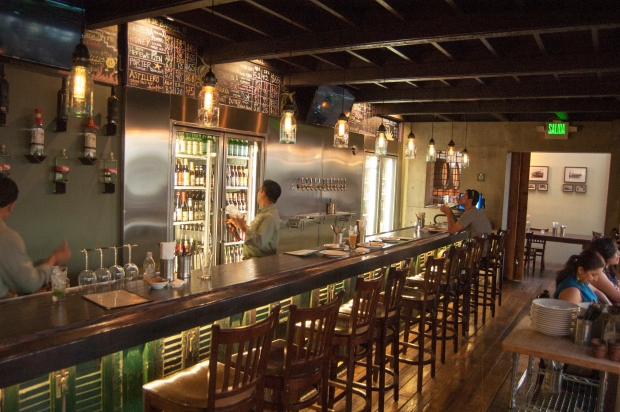 The dining patio is open-air and spacious. We rolled in at about 7:30 on a beautiful Friday evening (early for dining by Mexican standards), and only a few parties were there. Our 6PM reservation thankfully became a moot point. Later the restaurant was full of hungry and happy TJ locals. A large window gives a great view of the entire kitchen and all of the wood fired activity therein (more on that wood in a moment). The eclectic design of the restaurant’s exterior continues on the inside as well with fun touches and art motifs throughout the rustic, reclaimed interior.

The busy and efficient kitchen at Verde y Crema.

Our party was seated, and we were presented with menus in both English y Español containing 28 choices under the categories, “First Course, Second Course, Veggie Course, Third Course and Desert”. Vegetarians rejoice…Verde y Crema takes full advantage of their fresh local produce and creates some imaginative dishes, such as Roasted Beet Tacos, Veggie Blue Corn Guaripa with Summer Squash, and an Heirloom Tomato Salad, sprinkled with fresh queso from Valle de Guadalupe.

Most of the meats, seafood and produce used by the restaurant are organic. Tijuana-based Sous Chef Martin Vargas (who joined us later in the evening to discuss Verde y Crema) told us, “About 70-80% of what we use is organic. We buy produce from the market here, and source our seafood, meat and vegetables from all local sources.” Indeed, the restaurant’s sources include companies based in Tijuana, Tecate, Valle de Guadalupe, Ensenada and San Diego. 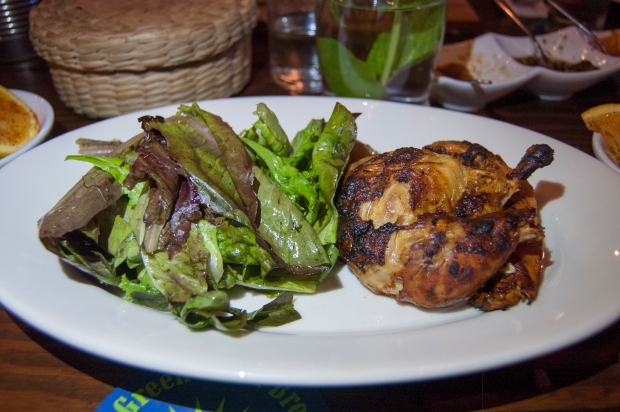 Martin continued, “The most fun part of our job is planning the menu. We always have 25-28 items, but everyday, we change 15-20% of the menu based on what’s available and fresh. With seafood, it may be yellowtail one day, but it may be swordfish the next. So we plan accordingly.”

Okay, so with all of this buildup, you must be getting hungry. But wait, there’s one more very important thing about Verde y Crema that REALLY makes them special. Chef Vargas let us in on their not-so-secret-secret, “There is no stove in our kitchen. We have the Santa Maria grill, and we have the wood oven. We do have a fryer, because we found it doesn’t work so well to deep fry over wood. But that’s it. And we only use olive wood imported from Valle de Guadalupe. Cooking with wood is dangerous sometimes, but it’s the best way.” At this, Chef Vargas showed us the latest of several burn wounds on his arms. Now THAT is dedication to food, my amigos!

Verde y Crema cook only with olive wood. No gas or stove in this kitchen.

Onto the food. We started out with two of the ceviches under “First Course”. The first was the Yellowtail Tiradito with Jicima, Spring Onion and Sea Beans. The sea beans were a great addition and added a nice snap to the tenderness of the fresh yellowtail. The spring onion was just mild enough not to interfere with anything and was a nice complement. This plate didn’t last long. 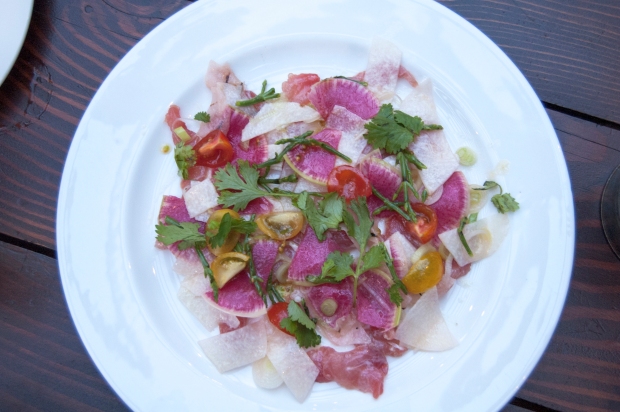 The next item was one of El Gringo’s favorites of the night, having a weakness for jumbo Callos de Hacha, or Diver Scallops. Verde y Crema’s Callos de Hacho Ceviche with Pickled Red Onion, Lemon Verbena and Cucumber was perfection on a plate. The scallops were thinly sliced and super fresh. The lemon worked, the pickled onions made me think of a pibil in the Yucatan. Look for this particular dish to be toward the top of my Chowzter picks for Tijuana soon!

Both the Yellowtail and Scallop ceviches were served with thick, delicious blue corn tortillas, fresh off the olive wood fire from the kitchen. Alongside these tasty tortillas were three salsas of peanut, habañero and roasted tomato and chiles. Fantastic.

It was time for some tacos. The Blue Corn Gorditas with Grilled Octopus, Cheese and Pickled Vegetable were delicious. The standout of this round though were the Korean Tacos with Carne Asada, Kimchi, Japanese Peanuts and Blue Corn Tortilla. The flavor of the kimchi and familiar Korean BBQ tanginess of the sauce spread on the perfectly grilled carne asada was right on.

At this point, we were still hungry and hesitated for a moment…should we just order another round of exactly what we just had? It was that good. But instead, decided to move down the menu and onto some heartier fare. The Grilled Organic Chicken with Adobo and Roasted Vegetables Salad (shown earlier in this post) was moist and the adobo on the skin had great texture and taste. We also ordered the Grilled Cheese Sandwich with Birria de Res, Heirloom Tomato Salad and Fried Potatoes. Huge, packed with delicious birria and mouthwateringly good. Not feeling too adventurous? Verde y Crema also grill a mean hamburger which we duly ordered and devoured. 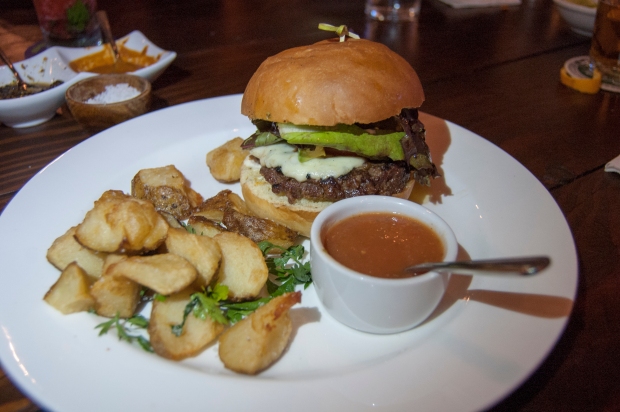 Toward the end of the meal during our conversation with Chef Vargas, he brought out a bottle of Joven (young) mezcal called “La Panca”. Made from wild agave, this smooth mezcal is made exclusively for Verde y Crema and goes great with some oranges and sal con guano (salt with Maguey worm extract). As we raised our glasses and said “Salud”, Chef Vargas concluded, “We are so happy to be in Tijuana right now with all of the great food happening here. We set our own standards and are more mature every day. We know that if we enjoy it (the food), you’ll enjoy it.” We undoubtedly did and El Gringo will return to try some of their other dishes muy pronto!

Your Gringo in Mexico,
Scott

Crema y Verde is located in the Chapultepec area of Tijuana at Orizaba 3034, Colonia Neidhart. Visit their website at www.verdeycrema.com for more information. NO DISCLAIMER NEEDED. El Gringo and friends visited Verde y Crema primarily to enjoy their food and atmosphere and we paid for our meals. And we’d do it all over again, anytime!