MEXICO CITY – In a metropolis of over 25 million people and somewhere north of 36,000 food stalls, fondas and restaurants, it’s a daunting task to decide what – and where – to eat in Mexico City.

The capital is a nexus for transplants from elsewhere in Mexico, and their traditional regional recipes are woven into the culinary fabric here. Many dishes date back to pre-Hispanic cultures, adding the dimension of time to the rich tapestry that is Mexican cuisine.

And all of this great food can be found and enjoyed on nearly every street corner and in the elegant restaurants of famous chefs – whose tasting and a la carte menus often pay homage to tradition.

Taking it to the streets with FoodieHub

The impetus for my trip to Mexico City was an irresistible trifecta of culinary award invitations: the 2015 San Pelligrino’s Latin America’s 50 Best Restaurants, the 2015 MoFilm Awards and the FoodieHub 2015 Latin American Dining Guides Launch and Awards.

FoodieHub led a 72 hour blitz on Mexico City, deploying over a dozen food writers, photographers and videographers on the street food, casual dining and fine dining scenes. We averaged 5-7 meals/snacks per day and typically enjoyed a “dessert” of late night tacos with FoodieHub founder and CEO Jeffrey Merrihue.

Our knowledgable guides on this whirlwind tour were Good Food in Mexico City’s Nicholas Gilman and Conde Pétal (aka: Paco) from Eat Mexico Culinary Tours. Amigo, collaborator and former Mexico City resident Román González took us north of town later in the week to try some of his favorite spots. 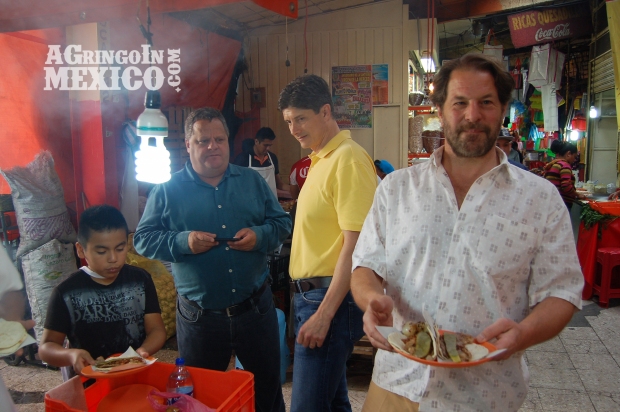 Mexico City: A mecca of street food and casual dining

There are taquerias in every neighborhood in Mexico City that serve a mosaic of taco types, from al pastor (tacos of marinated pork) to tacos de insectos — which are just that, tacos of various crawly critters including chapulines (fried grasshoppers) and gusano de magueys (worms from the maguey cactus). Other stalls and fondas serve tostadas, tortas, mariscos (seafood) and many more street and casual dining favorites.

This is by no means a comprehensive list, just what I enjoyed and would recommend to you on your first – or next – visit to Mexico City. Provecho!

1) Tacos Hola El Güero (Condesa)
We had our “welcome” tacos here shortly after landing in the metropolis and checking into our hotel in the Condesa area. This small fonda specializes in tacos guisados, which are tacos containing stewed meats, vegetables and other ingredients. Their taco of chorizo includes potatoes, black beans and a welcome sprinkle of Cotija cheese. Amsterdam 135, Col. Condesa, Hipódromo, Cuauhtémoc, 06100 Mexico, DF 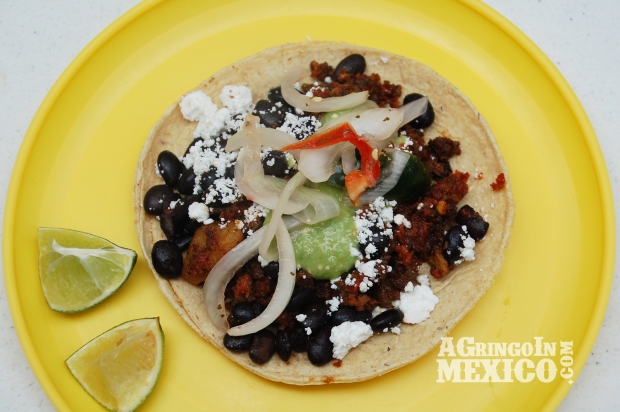 2) La Hidalguense (Roma Sur)
Barbacoa is believed to have originated in Barbados, eventually making its way to Mexico. Lamb is wrapped in maguey (a type of agave, also used in the production of mezcal) sections and slow cooked in a pit. Heaped into a warm, just-made blue corn tortilla, the tender, savory meat melts in your mouth as the colorful environment and staff’s folkloric uniforms take you back in time to old Mexico. Campeche 155, Col. Roma Sur, 06760 Mexico, DF 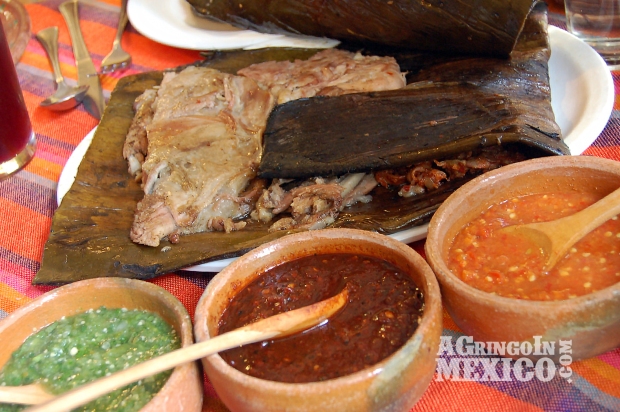 The barbacoa at La Hidalguense is widely considered the best in the city. 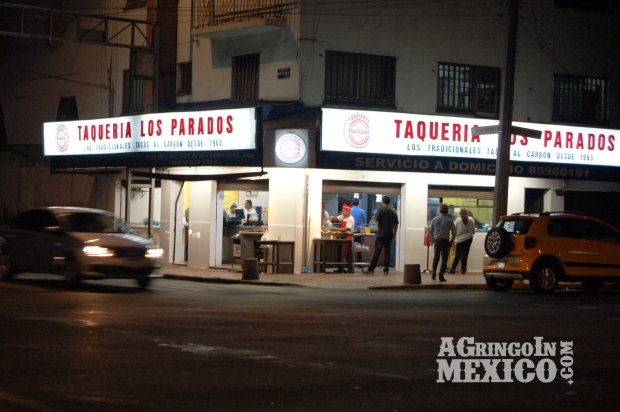 4) Tostadas Coyacán (Coyacán)
This stand at the Mercado Coyacán offers a variety of ingredients served atop a crispy tostada. Selections range from a number of ceviches (seafood “cooked” in citrus) to salpicon (meat minced or diced with chiles). Beware of imitators. Other shops have cropped up in the mercado with similar names and bright yellow signage, but I’m told these wannabes are not even close to the real thing. Ignacio Allende 59, Del Carmen Coyacán, 04100 Mexico, DF 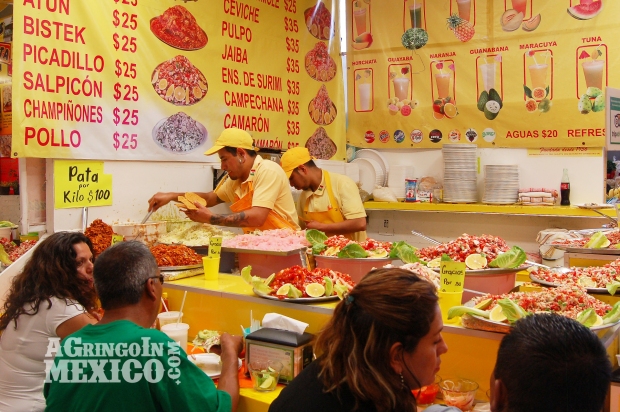 5) Tacos La Pasadita (Centro)
Located in the bustling Mercado Merced, this family of taqueros adds a slice of grilled nopal (cactus) to your carne asada, chorizo (a spicy pork sausage) or other griddled meat taco. Make sure you check out some of the many food items for sell in the market. We bum rushed to get to these tacos, but other stalls were cooking and selling a variety of grilled meats and traditional Mexican favorites. ‪Rosario 180, Centro, 15810 Mexico, DF 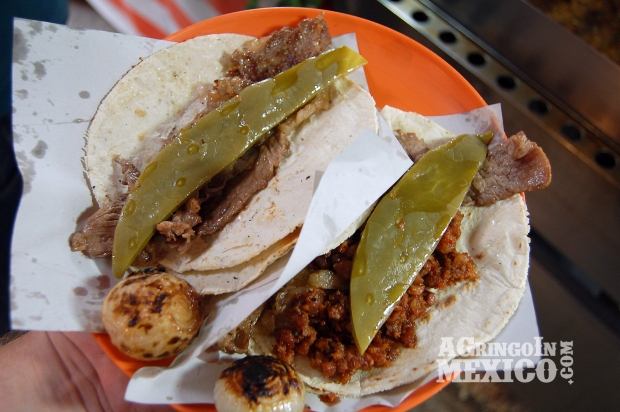 6) Marisqueria El Caguamo (Centro)
Coming from Baja California I didn’t expect much from street seafood in Mexico City. But I was pleasantly surprised when El Caguamo’s campeche of marinated shrimp, mussels, clam and oysters was not only flavorful, but fresh and toothsome. Their fried fish looked and smelled just as good. Ayuntamiento 18 (López), Centro, Mexico, DF 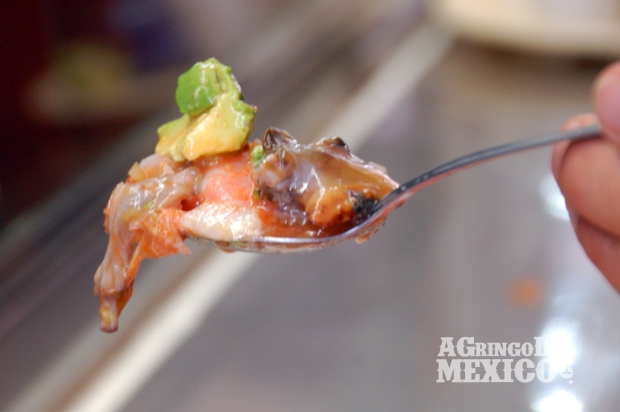 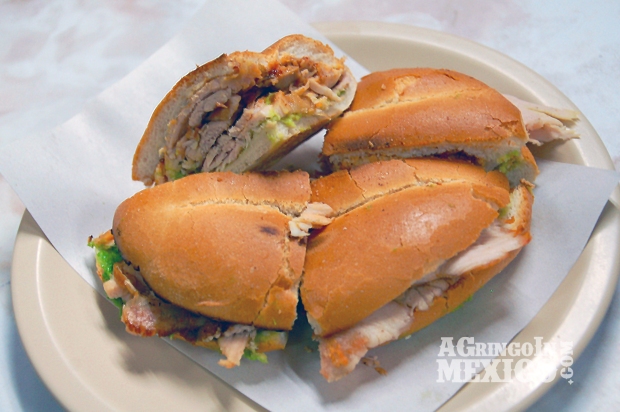 8) Mercado San Juan (Centro)
A favorite of local chefs and gourmands, this most visceral of Mexican markets displays freshly slaughtered pig, beef, rabbit and poultry on the counters, from ceilings and draped on walls for demanding customers to inspect. You can also sample most the products here from various stalls. We enjoyed a plate of almejas chocolata (chocolate clams) from one of the vendors where their talented marisquera opened, cleaned and prepared them for us with a little lemon and a splash of salsa. ‪Calle de Ernesto Pugibet 21, Centro, Mexico, DF 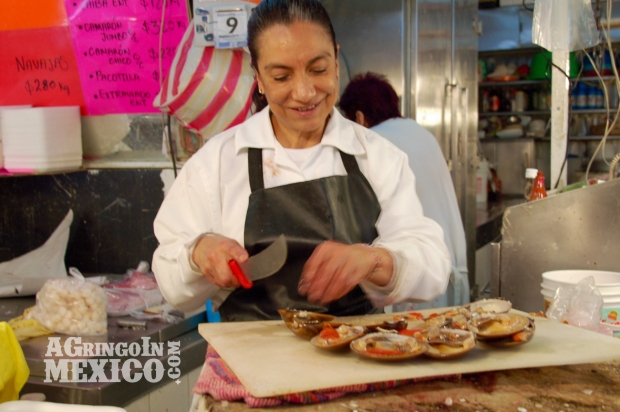 9) Taqueria Los Cocuyos (Centro)
This small sidewalk stand near the zocalo is always crowded with hungry customers. Los Cocuyos is well known for its tacos de tripa (cooked small intestine). I usually like mine on the crispy side – and grilled vs. griddled – but the soft preparation here was well-seasoned and the tripa was not at all rubbery. The chorizo is also excellent. ‪Calle Simon Bolivar 56, Centro, 06000 Mexico, DF 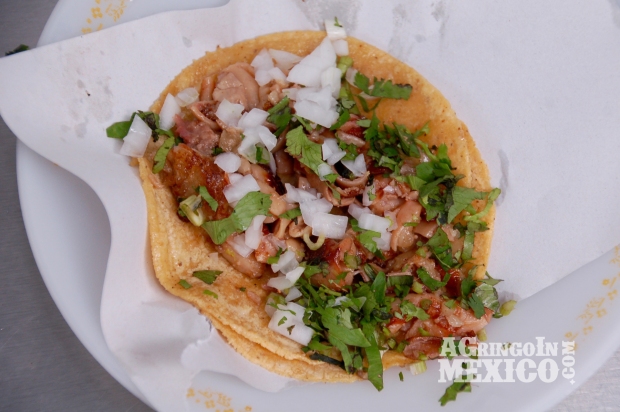 The taco de tripa from Taqueria Los Cocuyos near the zocalo.

10) El Moro (Centro)
For dessert, step back in time and check out Mexico City’s legendary El Moro for their churros (fried bread coated in sugar and cinnamon) and hot chocolate. This is all they’ve served since 1935 and they are purported to be the best in city. A must visit for any sweet tooth. Eje Central Lázaro Cárdenas 42, Cuauhtémoc, Centro, 06000 Mexico, DF 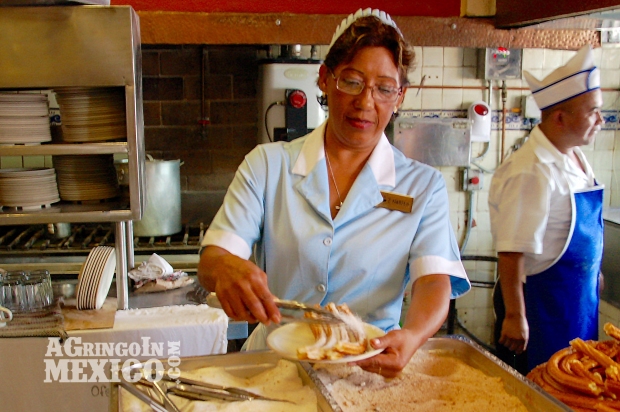 Making churros at the legendary El Moro in Mexico City.

11) La Casa de Toño (Tlalnepantla)
For pozole rojo (red hominy soup), my amigo Román insisted that we try it at this popular chain. La Casa de Toño offers a number of traditional Mexican dishes and is run with production-line efficiency by its uniformed staff. The pozole is perfectly seasoned, spiced and loaded with succulent pork. There are several locations around the city to choose from. Juana Inés de la Cruz No. 80, 54030 Tlalnepantla, Mexico 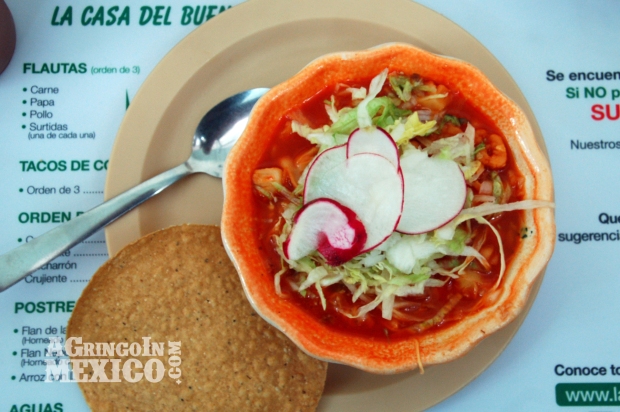 12) Tacos La Güera (San Nicolás)
My favorite taco on this trip was from Tacos La Güera, located in the industrial zone of Tlalnepantla. The taco de bistek is a quesotaco, where a generous amount of succulent grilled skirt steak, lightly marinated in lemon, is heaped atop a quesadilla of three locally-produced cheeses. Top with the also lemon-marinated onions and a splash of the spicy house salsa and enjoy what might be the perfect taco.  Toltecas S/N, Industrial San Nicolás (Zona Industrial), Mexico, DF 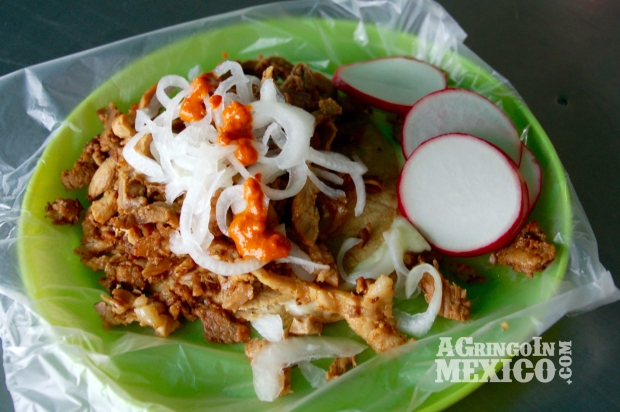 COMING SOON: Look for Part 2 of our culinary adventure in Mexico City, where we give you the dish on some of the city’s fine dining and modern Mexican restaurants.

Your Gringo in Mexico,
Scott

Since 2013, I’ve been the FoodieHub expert in Baja California — one of the 275 regions covered by 175 FoodieHub experts worldwide. Our mission is to find and report on the world’s best dishes, chefs and restaurants and make this information available via web, the FoodieHub app, YouTube and our new global dining guides.

For more detailed information on food in Mexico City, El Gringo recommends amigo Nicholas Gilman’s book, “Good Food In Mexico City”, available in paperback and as an eBook on Kindle. You can also visit Nick’s website at GoodFoodMexicoCity.com.

For cultural and food tours in Mexico City and Puebla, request my amigo Conde Pétatl (aka: Paco) through EatMexico.com. I’ve now toured Puebla, Cholula and Mexico city with him, and his tours are always tasty, enriching and fun.

1 Comment on A Gringo’s Guide: Eat your way through Mexico City (Part 1)