Producers from all over Peru show their wares at Mistura 2014.

The Chowzter Latin America’s Tastiest Fast Feast 2014 awards were the catalyst for my visit to Lima. I’ve been part of this 100+ strong collective of global food bloggers since 2013 as “chief Chowzter” for Tijuana, Rosarito Beach and the Valle de Guadalupe in Baja California. Our mission is to seek out, photograph, consume and report on recommendations for the top “Fast Feasts” in our respective cities – with a focus on street food and casual dining. Three of my recommendations were nominated, and having attended the global Chowzter awards in London earlier in the year, I was looking forward to eating, chatting and partying with some old amigos as well as getting to know a few new ones. When you have food and travel in common, there’s never a lull in the conversation and every shared meal promises to be an adventure – or at least a learning experience.

You say ceviche, I say cebiche…

Cebiche – fish “cooked” by marinating it in citrus juice – originated in coastal Peru as early as 15,000 years ago. Peruvian cebiche incorporates large chunks of halibut, sole or sea bass which are quickly marinated in citrus juice. Only the simplest of ingredients are added – typically chopped chilies, a little salt, red onion and cilantro. Cebiche is often served with choclo (Peruvian corn on the cob), canchas (corn nuts) and a sweet potato on the side. All of this goes down very well with a cold Peruvian cerveza.

Making its way up the Pacific coast over the years, the original cebiche recipe somehow got lost in translation and became the ceviche that is typically served elsewhere in Latin America today. In Mexican ceviche, the fish is usually cut into much smaller pieces and tomato, celery and other ingredients are added. And – with apologies to my amigos y amigas in Mexico – no Peruvian would be caught dead eating cebiche on a cracker with ketchup!

Another perfect plate of cebiche at El Delphin restaurant in the Barranco neighborhood of Lima, Peru.

I had four courses of cebiche in Lima at four very different venues – the Mercado Central, Mistura, the Restaurant El Delfin in the Barranco neighborhood and Chez Wong – the standout of the four.

An Anthony Bourdain and Chowzter favorite, Javier Wong operates his cebicheria from his home in a poorer neighborhood in Lima. After we were seated, the thin but far from frail chef mystically appeared at the prep station at the front of the room. Several of us formed a semicircle around him to take photos as he quickly broke down the large flounder that was to become our lunch. Chef Wong mixes the then cubed fish with lemon juice, red onions and salt with a side of spicy red chilies to create what many consider the perfect cebiche.

Javier Wong breaks down a fresh flounder for his cebiche in no time at all. 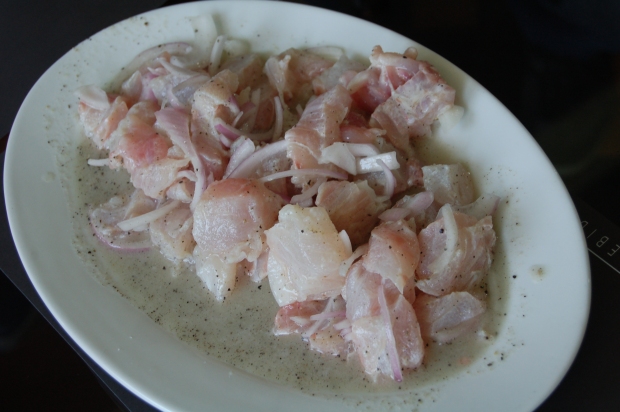 El Gringo’s culinary tour of Lima continued with a visit to one of the city’s public markets. Heeding our taxi driver’s advice to keep cameras secure and our wallets in our front pockets due to petty theft, three of my fellow chief Chowzters and I cautiously but excitedly disembarked at the Mercado Central to a whirlwind of color, smell and sound. No trip to a Latin American city is complete without a visit to the market to experience how the locals live, socialize and eat. And in Lima, they’re eating very well.

Colorful and varied fruit on display at Mercado Central, Lima. 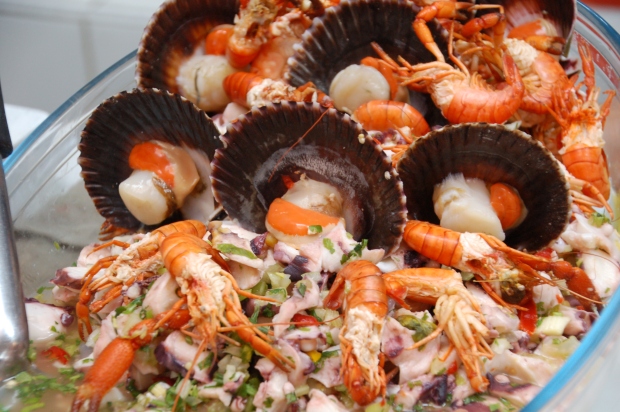 Fresh and friendly cebiche prepared to order at the Mercado Central in Lima.

The market is right on the edge of – strangely – a sizable China Town, complete with dragon-lined entry gates, black and red lacquered surfaces and freshly prepared Peking duck hanging in shop windows. When the Chinese settled in Lima in the 19th century, their cuisine fused with that of their host country creating “Chiffa”, now a popular dining option all over Lima from the markets to white tablecloth establishments.

Mistura is the largest annual food fair of its kind in Latin America and the premier cultural event in Peru. The event’s slogan this year – “Eat tasty, eat healthy, eat Peruvian” – was easy to obey. Vendors from every area of the country assembled in a series of tents and enclosures on the beach in Magdalena del Mar to present their cuisine to an expected crowd of one million attendees. A huge market also offered regional artisanal and culinary products for sale.

El Gringo spent a day and a half at Mistura with food writer Nicholas Gilman, author of “Good Food in Mexico City”. Nick recruited me as a chief Chowzter in 2013 and was the perfect companion at the food expo as he’d been to Lima and has a working knowledge of its cuisine. We sampled a little of everything including leche de tigre (thickened ceviche “juice” with corn nuts and other ingredients), alpaca anticuchos (marinated, grilled and skewered cousin of the llama) and some excellent smoked pork from Al Cylindra de Javi. The food and drink were endless, varied and delicious and the vendors were more than happy to talk about their wares and pose for a photo or two. 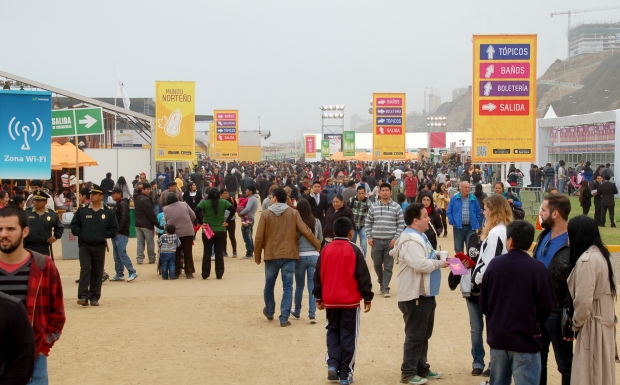 Mistura 2014 was expected to draw 1 million visitors this year. 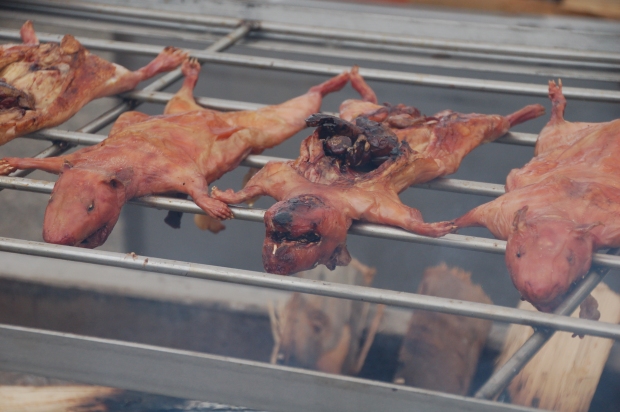 Cooking cuy (guinea pig), a traditional dish, over an open fire at Mistura 2014.

Various types of corn at Mistura 2014. 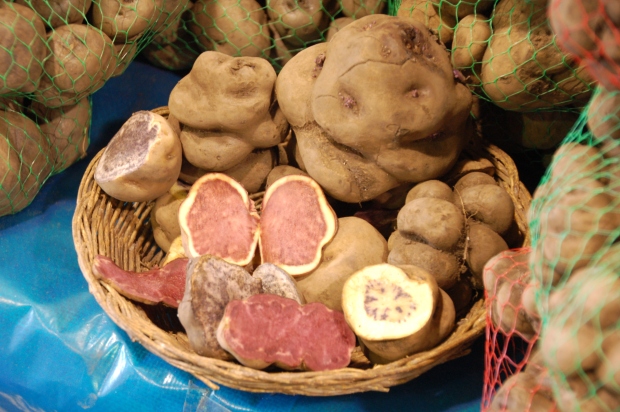 Essentially the Oscars of the culinary arts, this regional competition of the World’s 50 Best Restaurants attracted top chefs, food writers, photographers, restaurateurs and industry insiders from all over Latin America. There was one night of accolades and many more nights of after-hours parties at Lima’s top restaurants and cantinas.

El Gringo and other Chowzters attended the awards at the Lima Country Club Hotel, which was awash with glitz, glamour and great food. At the end of the night, two Baja California restaurants, Manzanilla in Ensenada and Corazon de Tierra in the Valle de Guadalupe, ranked at 25 and 42 respectively. Lima’s own Central was hailed as top spot this year.

The all night rager at La Picanteria kicked off the week of debauched after-parties. Chefs around Lima had allowed their staffs to attend, but with the caveat that they must be at work on time the next day. El Gringo partook in the revelry and enjoyed some excellent anticuchos de corazon (marinated, grilled and skewered beef heart) from a street cart that had been hired for the event.

Astrid & Gastón Casa Moreyra hosted the Chowzter Latin America’s Tastiest Fast Feasts 2014 awards this year. An intimate gathering of 15 chief Chowzters met with the site’s founders – Jeffrey Merrihue and his brother David Bullit – to discuss the direction of the venture, enjoy a multi-course menu of Peruvian inspired food from Casa Moreyra and to find out who would win from the many great nominees in this year’s Latin American awards.

Gastón Acurio himself paid an hour-long visit to the Chowzters. During a Q&A session, Lima’s leading restaurateur and promoter of his national cuisine outlined his vision for a Mistura-style event to be held in different cities around the world every year and shared his thoughts on elevating the role and status of smaller Peruvian farmers. The chef also admitted that the poorer people of Peru can’t afford to go out to eat, or to Mistura, and that somehow the culinary winds that are currently blowing should sweep up Lima’s poorest as well. 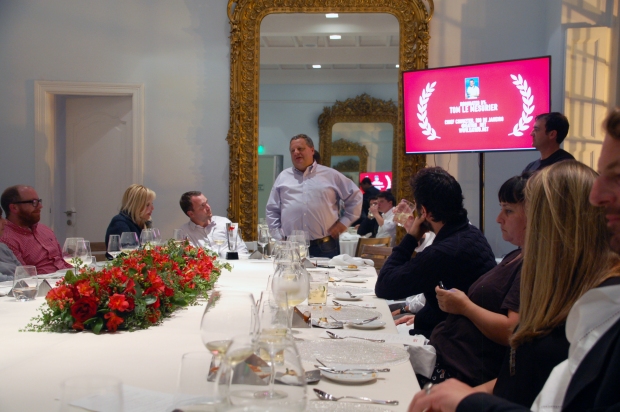 Not coincidentally, that night’s after party for the Latin America’s 50 Best Restaurants was held on the grounds of Casa Moreyra. At 11:30 sharp, carloads of the who’s-who of Latin American cuisine began to arrive and the Chowzters mingled, nibbled, danced and drank into the morning hours. El Gringo was prepared to leave at 3AM when a fellow chief Chowzter – who shall remain nameless – appeared out of the blue with a bottle of Chilean Chardonnay and four stems, admonishing, “You’re not going yet, are you?”. When in Lima…

Saying ciao to the Chowzters and all the great chow

Wined, dined and pisco soured-out, I said goodbye to Lima from the back of a morning rush hour cab to the airport.

As we inched our way through a congested, gritty neighborhood, the smell of exhaust gave way to something quite different. Scents of grilled meat and fried dough wafted in through the car window. Colorful food carts lined the street, selling anticuchos de corazon and picarones (a fried donut of sorts made with dough and sweet potato). Cart customers weren’t the upper class diners at IK, Maido or Central. Nor were they one of the million middle class attendees at Mistura. These were the poor and working class of the city in need of an affordable, nutritious bite before a long day of hard work – or a long day surviving the hard streets.

Perhaps Gastón Acurio need look no further than Lima’s poorest neighborhoods and its street food for his continued goodwill and next hand-up to the Peruvian people? A Mistura style event on a smaller scale in these areas could bring much needed revenue, pride and security.

Your Gringo in Mexico via Peru,
Scott